KCAT Residency: Update from the artists

Age & Opportunity partners with Kilkenny Collective for Arts Talent (KCAT) each year in order to support partnerships between artists with learning disabilities and professional artists of different backgrounds and skills. KCAT is a dedicated and open-access life-long learning initiative.

The 2020 recipients of the KCAT Residency, Rachel Parry and Alan Counihan, have shared details of their work undertaken during the residency which we are delighted to share with you. 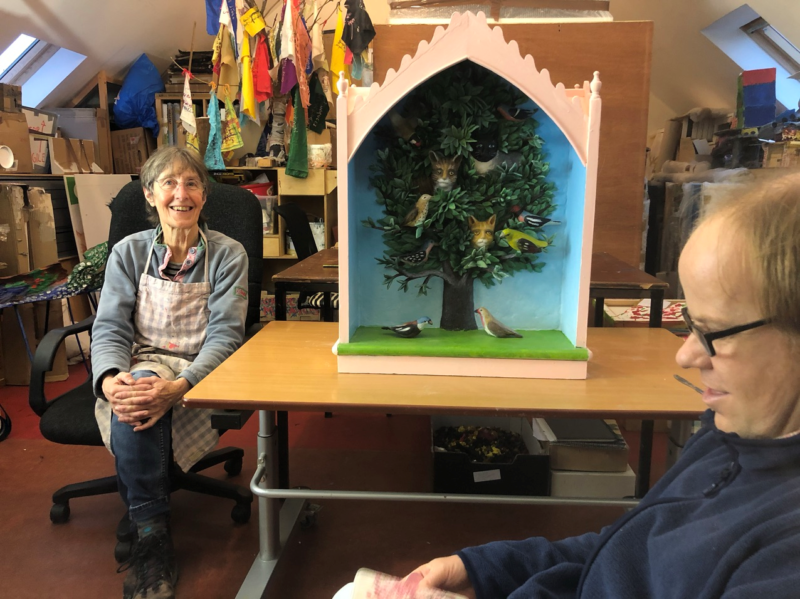 I love being at KCAT, spending time with a group of people with whom I feel so immediately accepted just the way I am. I learn so much.

For the last few years Jason Turner and I have been working together as part of the Engage Project. Working with Jason is one of the most intimate, challenging, precious and real relationships I have. My hope is that it is going to continue for a long time. Unfortunately Allihies is a long way from Callan which makes the residency even more welcome.

In 2019 Jason came to Allihies for a week to spend time here my studio where we completed a piece ‘Owl Fern’ which is in the touring Engage exhibition. Last week we finished another piece which we started last year. We were both very happy with how it turned out and look forward to exhibiting it in the final leg of this exhibition.

Making art together has been such a great way to make friends. Our relationship feels like a priceless piece of art.

As always all the staff at KCAT went out of their way to be supportive and helpful. They must have put so much work into setting everything up so that we could be there during this difficult time. 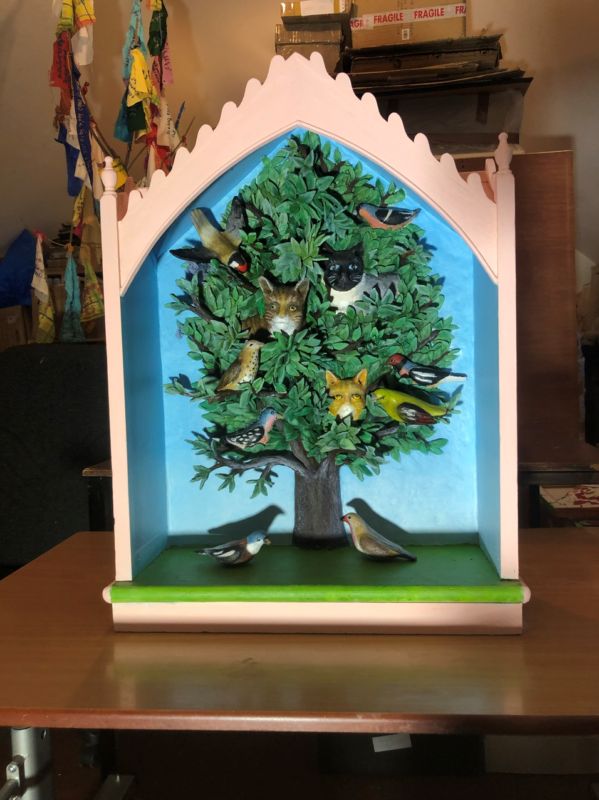 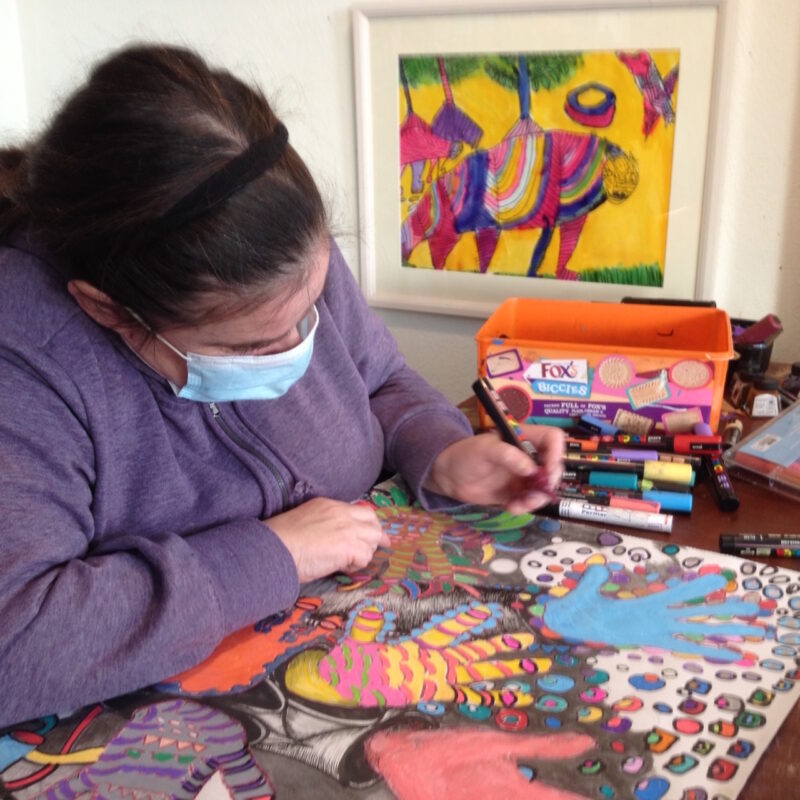 Due to social distance restrictions combined with other health and safety precautions the time frame of the residency also had to be altered. As a result the residency took place on one day weekly over four consecutive weeks. The artists involved in the residency were KCAT studio artist, Sinead Fahy, while Alan Counihan was the artist invited to work alongside her in a collaborative process.

Sinead and Alan, both established artists with many years of successful work behind them, have very different work processes and create very different kinds of work. Sinead’s work is primarily two dimensional, highly colourful and can be well described as joyous while Alan’s is spare, stark and most often three dimensional. An important challenge for all artists involved in a collaborative engagement is the adaptation of their creative skills and techniques so that they can merge one with another into a form of artistic expression that is entirely new to all participants.

The plan had been to create a series of two-dimensional works by each artist that would be overlaid one on top of another with a small space between them. Using cut-away techniques the portions of each drawing would be revealed, one behind the other. 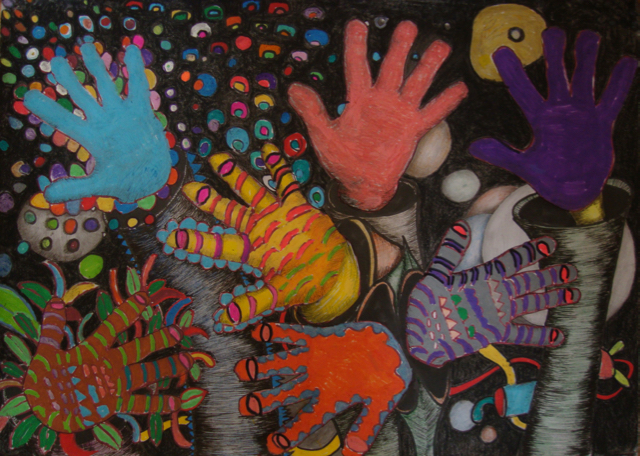 For the purposes of the residency, it was decided to begin afresh and entirely spontaneously with no presentation format or finished outcome in mind. Spontaneity was a challenge as it was not possible to share equipment or material without an intervening sanitisation process but it was a loosening up exercise that both artists felt to be essential. To circumvent the challenge two drawings were initiated simultaneously and passed at intervals from one to another. This involved quite a bit of laughter and enjoyment as neither artist was too precious about the outcome. Eventually one of the drawings was abandoned and the other pursued toward its completion with both artists working on it at separate times.

What began as an exercise in spontaneity has developed towards a completed work with which both artists are satisfied. While allowing compositional freedom to both participants, it has enabled Sinead to continue her expressive two dimensional visual language where everything is presented sideways-on, while Alan has been able to provide depth and contrast within the drawing.

Sinead and Alan have greatly enjoyed and derived much benefit from the residency. It has allowed them the time to develop a new way of working together which will be of great benefit to both artists as they continue their creative collaborations into the future and is an opportunity for which they are most grateful. 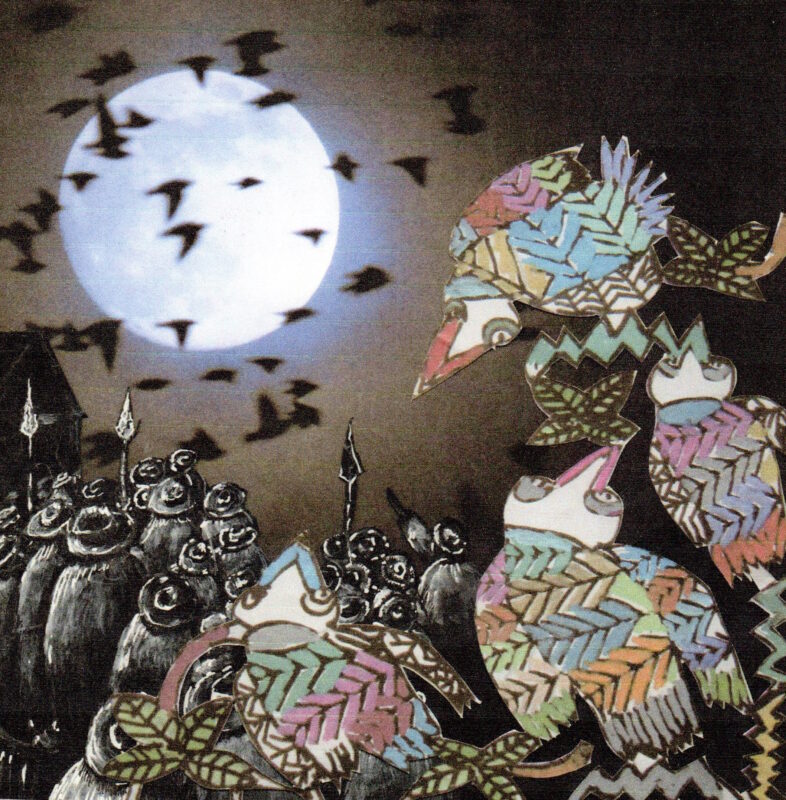