The National Archives Presents The Treaty, 1921: Records from the Archives 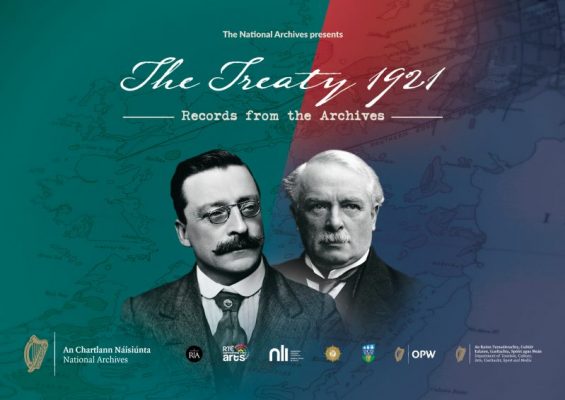 One of the most important documents in Irish history, the 1921 Anglo-Irish Treaty is presented, along with many significant historical records, official documents and private papers, in an immersive exhibition designed to mark the centenary of the negotiation and signing of the Treaty.

Beginning with the exploratory talks between Éamon de Valera, President of Dáil Éireann, and British Prime Minister David Lloyd George during the summer of 1921, the exhibition chronicles day-to-day life in London for the men and women who made up the Irish delegation, from parties attended, dinners hosted, to the tense final days and hours leading to the signing of the Treaty just after 2am on 6 December 1921.

Finally, it documents the delegation’s return to Dublin, and the Dáil Éireann cabinet meeting that pointed to the split in the independence movement that emerged over the terms of the Treaty, and the divisions that would lead to civil war.

The Treaty, 1921: Records from the Archives is presented by the National Archives in partnership with the Royal Irish Academy, the National Library of Ireland and the Office of Public Works, with records from the collections of the Military Archives, Dublin and University College Dublin Archives. It is supported by RTÉ Supporting the Arts and will tour nationally in 2022 in association with a number of Local Authorities.