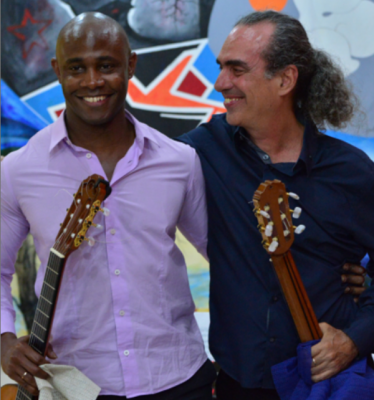 The famous composer and guitarist Eduardo Martín joins the renowned young guitarist, Ahmed Dickinson Cárdenas to create this duo that masterfully addresses the diverse tendencies and styles of the Cuban contemporary music scene.

This proposal, with the full repertoire of Mtro. Martín explores Afro, classical and Anglo-Saxon pop among other varied musical genres that mix in the creative universe of this composer while using in a virtuous way multiple techniques that expand the expressive qualities of the guitar. The use of intelligent melodies, the approach to cultures and dissimilar times converge with the Afro-Caribbean nature trying to propose a musical framework in which the stylistic barriers disappear.

The guitar is his favoured instrument to mirror the melodic and rhythmic intricacies of the Americas’ cultural diversity. Before moving to England, Dickinson Cárdenas took lessons with Eduardo and their friendship, idiosyncratic empathy and mutual respect has since transformed into a vehicle that connects, incorporates and juxtaposes their different generations, their musical ideas and ultimately the spiritual journey that drives this unique record.

The album is a compilation of some of Eduardo’s most alluring works for two guitars, where rock merges with son montunos; old Yoruba chants, feel-good rumbas, funk- boleros, new age tunes and cinematic pieces sit alongside Cuban tumbaos with slap bass. The Bridge is a wondrous display of fluidity, a continuous study of the Latin guitar, past and present.