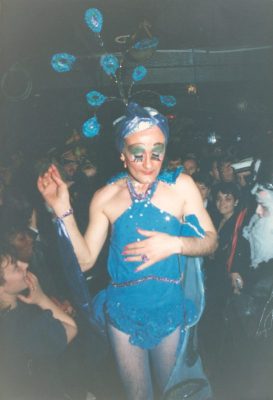 This event is part of Flikkers – Come As You Were, the Age & Opportunity Bealtaine Festival Commission for 2022 supported by the Arts Council and Dublin City Council. A series of events remembering and celebrating the Flikkers Disco era at the Hirschfeld Centre and the generation who were there. Flikkers invites older LGBTQ+ people to dance and celebrate this seminal period of social and cultural activism.

Join us for this Warm Up DJ Set with Gerry Moore spinning music from the Flikkers Disco era. Tonie Walsh will also be selling records from his cherished vinyl collection at The People’s Pavilion, IMMA.

Tonie Walsh is a civil rights activist, historian, and journalist. He was a significant player behind Dublin’s LGBT resource, the Hirschfeld Centre, and also worked as a journalist on OUT, Ireland’s first commercial lesbian/gay periodical (1984-1988). He was the founding editor of GCN, Ireland’s most successful queer publication, and launched the Irish Queer Archive in 1997. Throughout 2021, he co-curated a cultural programme with the National Library of Ireland as part of Living With Pride, its exhibition of Christopher Robson photographs. Walsh currently divides his time between Turkey and Ireland, busying himself with a number of other research and writing projects.

Gerry Moore a veteran DJ, has been entertaining the LGBTQ+ community and beyond, over 30 years, starting in the Hirschfeld Centre youth group, in 1985, then becoming one of most in demand Irish DJs, with a special blend of pop house and disco , seamlessly mixed 🙂