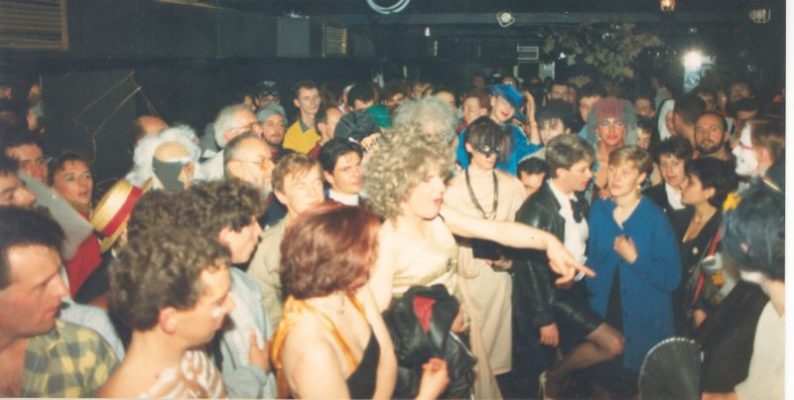 This event is part of Flikkers – Come As You Were is the Age & Opportunity Bealtaine Festival Commission for 2022 supported by the Arts Council and Dublin City Council. A series of events remembering and celebrating the Flikkers Disco era at the Hirschfeld Centre and the generation who were there. Flikkers invites older LGBTQ+ people to dance and celebrate this seminal period of social and cultural activism.

With live stream via GCN TV.

Hannah Tiernan is a researcher, writer and visual artist based in Dublin, Ireland. Her key area of interest is contemporary Irish LGBTQ+ history and expanding voices within the Irish LGBTQ+ community. Throughout 2022, Hannah is coordinating the REWIND<

Since March 2021 Hannah has been the editor of the Queer-in-Progress. Timeline: Online Archive, an initiative to map the expanded narratives within the canon of Irish queer history; focusing on lesbian, feminist, female-identifying, trans, bi and HIV/AIDS histories. From 2018 to 2020, Hannah was a researcher on the ACTIVE ARCHIVE – SLOW INSTITUTION initiative with Project Arts Centre and was the lead researcher for the Queer-in-Progress. Timeline display in March 2020. In 2019 she authored ‘Foul, Filthy, Stinking Muck’: the LGBT theatre of Project Arts Centre, 1966 – 2000, and curated and hosted an accompanying symposium. As a visual artist, Hannah has exhibited her photography and sculpture throughout Ireland and has several works housed in private collections. Along with academic writing, she frequently publishes articles exploring contemporary Irish LGBTQ+ histories. Her poetry and visual art often explore themes of sexuality and gender identity. www.hannahtiernan.com

David Carroll worked has worked in the arena of sexuality and sexual health for over 25 years, for organisations including AIDS West, Gay Men’s Health Service (HSE) and BeLonG To. Currently a board director of Outhouse LGBT community centre, David completed an MA in Sexuality Studies in 2012. He is presently undertaking a doctoral thesis at DCU, which proposes the 1980s as a pioneering decade for representations of queerness in pop music.

Maurice Devlin grew up in County Derry but has lived in Dublin for most of his adult life. He became a Flikkers DJ shortly after his first visit to the club in 1981. At the time he had recently become a youth officer with the city’s VEC (now ETB) and was instrumental in securing registration and funding for the (then) National Gay Federation’s youth group, a decision that was subsequently revoked due to public controversy and political cowardice. At the end of the 1980s he moved to Maynooth University where he is currently Professor of Applied Social Studies and also holds the Jean Monnet Chair in European Youth Studies. Maurice has stayed involved with youth and community organisations and was a board member of BeLonG To Youth Services for many years until stepping down at the end of 2021. His feet keep dancing, although less frequently in public these days.

Orla Egan is a Queer Archival Activist and has been active in the Cork LGBT community since the 1980s. She is the Founder and Director of Cork LGBT Archive, author of Queer Republic of Cork book and of the Leeside Lezzies play, and Director of the short Cork LGBT film I’m Here, I’m Home, I’m Happy. She also works part-time with the new Full Stack Feminism in Digital Humanities project.

Eileen Leahy was a founding member of aLAF (a Lesbian Arts Festival 2002 to 2008); developed and ran Queervisual a public digital art project (2005 to 2007); founding member and performer with the Shamcocks Drag King Troupe 2004; Cabaret and burlesque promoter including Licky Rake and Rouge (Dublin Fringe Festival 2004 to 2006); range of fundraiser club nights including Mostly Girls (IFI 2004 to 2006) and Snackbox (Voodoo Lounge 2006 to 2008). And a wide range of other queer, underground events and happenings before and since. She is currently chair of Aisteach, a queer housing co-operative society.

Luiz Wellington – Irish by heart and Brazilian by birth, I have a multicultural view of life as a consequence of family, education and for living in Canada, Peru, Switzerland and I set up my heart in the Emerald Island. So far I am having an incredible journey in Ireland. I felt in love, I meet nice and interesting people and I could be part of Dublin Gay Mens Choir for about 4 years. This experience it was cornerstone to my personal growth as a gay man. I made new friends and I could socialise with people to share the same hobbies and interests and music is my passion. In the 80’s I was the only one kid growing up among people who were young at the time. I often have seen myself different in a certain way and I could say that I always had a theme for every situation in my life. I still remember the feeling I had when I saw Grace Jones on TV for the very first time. It was a challenge to identify with her because I didn’t know if it was male or female but I loved what it was there.

English was a language that I couldn’t master at the time but rhythm always spoke to me and because I like to dance I could say that Small Town Boy made me dance so much and I only could discover the lyrics and truly identify with that song in the 90’s. This grownup small town boy enjoyed the 80’s.